After having experienced PUBG Mobile on both iOS (iPhone OS X) and Android (early APK file), I will share with you the highlights of this game. Hopefully, you will have the first overview first before you start participating in this exciting and exciting battles.

PlayerUnknown’s Battlegrounds (In short: PUBG) is a battle royale-style online game developed and published by PUBG Corporation, a subsidiary of Bluehole. This game is based on the last man standing gameplay, which originated from a movie called Battle Royale.

In just 3 months after launch, this game has become one of the world’s most popular games with millions of players around the world. Tencent then negotiated with Bluehole to bring PUBG to the mobile platform, officially called PUBG Mobile. This move is the action of the manufacturer when the opponent of PUBG is Fortnite is responding to launch the mobile version for Android and iOS.

This version was developed by Tencent and operates with the help of Bluehole. With the original gameplay from the PC version, in addition to being released for free on both the Android and iOS platforms, PUBG Mobile is fast gaining #1 position on all mobile game charts. 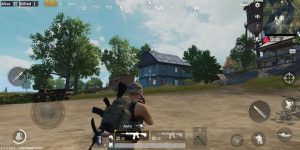 In the game, 100 players will join the war of survival after being dropped on a deserted island where they have to collect weapons and equipment to destroy other players and avoid being destroyed. There is a safe area that will shrink over time, forcing all survivors to move into a smaller area. The last living person will become the winner.

I was amazed at the graphics of the game. Although the mobile platform is not as powerful as the console or PC, Tencent still equips PUBG Mobile with a beautifully rendered graphics platform that resembles the original. The game starts with a picture of a plane carrying 100 people playing across a large island. You will start parachuting from the plane and pick a landing spot. The game is very smooth, flying in the sky gives me a feeling of freedom and peace just before I landed in a real-life arena.

Playing PUBG on Mobile is simpler

The first thing I like about PUBG Mobile is the auto-opening feature, auto loot items … If on a PC, you have to press F whenever you want to open the door to a house or pick up a piece of furniture. In PUBG Mobile you do not have to do anything because the game will do this for you. 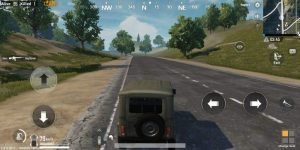 Moving and shooting in the game is quite easy with the virtual navigation keys on the screen. Activities such as drink, jump, sit, reload … are designed with a small virtual key on the screen. You will not have to remember every one of the shortcuts as on your PC!

Driving is also very interesting and not as difficult as the computer version.

In the MOD version, you will have Better Aim Assist, Trigger Mods (Easy Win).

With the Better Aim, you will easily defeat enemies and spend Winner Winner Chicken Dinner easily.

The first time I played PUBG Mobile, I was even surprised because I can not believe this is a mobile game. Highly detailed graphics, live sound and the fun of PUBG make this game one of the perfect games. If you are looking for a game Battle Royale to play, then PUBG Mobile is really the choice for you